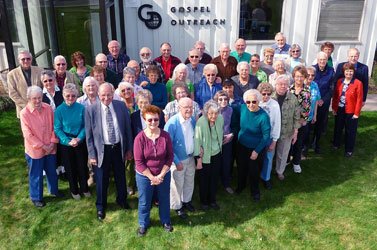 All of the administrators and personnel are volunteers. They believe wholeheartedly in the mission of Gospel Outreach. Some volunteers are shown in this picture. The average age is 80.

Gospel Outreach is a nonprofit 501(c)(3) organization fully dedicated to extending the international ministry of the Seventh-day Adventist Church in unreached areas of the world–with a special emphasis on the 10/40 Window.

Founded in the early 1990s, Gospel Outreach raises funds to help sponsor more than 2,000 indigenous (local) Bible workers in more than 50 countries. Did you know it costs only $150 per month on average to support a Bible worker in his or her own country?

Gospel Outreach has no salaried employees. Staff, officers, board members and regional directors are volunteers of singular purpose: sharing the story of Jesus. With a sense of utmost urgency, given our location in the last days of earth’s history, we invite you to join in this mission of fulfilling the Great Commission.

Attempt something so impossible that unless God is in it, it is doomed to failure.
by Fred Moore, Consulting editor.

Imagine for a moment that you live in a space station orbiting the Earth.

As you move your gaze westward you discover the extent of your view lies just west of the continent of Africa. Glancing eastward, you can just make out the islands of Japan and the Philippines.

You’ve found what is commonly referred to as the 10/40 Window—a portion of the earth’s surface where:

BRINGING THE GOSPEL TO THE UNREACHED

Peering down from an orbital perch—or simply reading impersonal demographic information—is no way to grasp the enormity of the spiritual and physical needs of this region.

For two Christian men, the path to fully understanding that need led them to the doorways of native huts dotting the rugged mountains of Floridabanga, Pampanga. In working side by side with the common Filipino people to help them meet their everyday needs in the early 1990s, Edgar Pangilinan and Frank Stanyer found ample opportunities to share the Gospel of Jesus. In these simple, quiet environs—despite the distracting squalor and disease—the voice of inspiration fell clearly on their ears.

As the possibilities rushed to their minds, they considered the many trained young Seventh-day Adventist Filipinos who, due to a lack of funding, were not employed in evangelism by the denomination. In these young men and women, Pangilinan and Stanyer saw the ideal ones to evangelize their own countrymen. They knew the language. They had grown up in the culture. They had accepted Jesus as their Lord and Savior. To Pangilinan and Stanyer, these young people held the keys to unlocking the Gospel for a greater number of their countrymen.

Pangilinan and Stanyer enlisted Edgar Navales to initiate a ministry among the pagan people on the island of Luzon. Navales accepted the call to minister.

In short order, Stanyer visited friends in the United States with a proposal. He proposed founding an organization administered by volunteers dedicated to raising funds to support local lay evangelists in the poorest countries of the world. The plan struck a responsive chord, and soon others joined in the creation of Gospel Outreach, a non-profit corporation dedicated to international ministry—with a two-fold goal:

Provide funding for local workers, employing them in evangelism for a fraction of the cost it would take to send an evangelist from North America.
Provide all administrative direction to Gospel Outreach voluntarily—thus reducing operating costs and directing to evangelism the largest possible portion of monies collected.

So the volunteer founders of Gospel Outreach began living by the motto, “Attempt something so impossible that unless God is in it, it is doomed to failure.” And their faith has proved once again that our Heavenly Father is the God of the impossible.

By 1997, more than 100 local evangelists were spreading the Gospel in 20 regions within the 10/40 Window. And although there were times when Gospel Outreach had more faith on deposit than funding, the God of the impossible miraculously supplied for the growing need.

The average cost per month to support a Gospel Outreach evangelist is $150 US. This stipend represents a living wage in the 10/40 Window—even though by North American standards this wage would be considered incredibly small. So, for approximately $1,800 per year, a local evangelist can be supported adequately.

The Lord continues to bless. Each year, the Gospel Outreach volunteer board of directors looks back and marvels at what He has wrought. Currently, the number of local evangelists sponsored through Gospel Outreach is 2,000+. These evangelists are at work in about 50 countries. Through the generous support of faithful contributors and the donation of thousands of hours of time by Gospel Outreach volunteers, approximately 90 percent of all monies collected by the ministry go directly to overseas evangelism within the 10/40 Window.

And, as the Lord has blessed and the ministry has grown, Gospel Outreach remains a humble, volunteer-directed non-profit organization dedicated to the spread of the Gospel through local evangelists. From what started as inspiration given to two men—once prayerfully shared with others—has grown into a conduit of love, mercy and hope for the most needy in our world.

CHALLENGE OF WORKING FOR CHRIST

The apostle Paul continually faced dangers as he preached the Gospel where the name of Christ had not been heard before. But with a calm faith and the passion of total commitment, he kept at it because he knew the value of a relationship with Christ. So he could say, “We are hard-pressed on every side, yet not crushed; we are perplexed, but not in despair; persecuted, but not forsaken; struck down, but not destroyed” (2 Corinthians 4: 8, 9).

As stories from Gospel Outreach evangelists reach us, we realize anew that very little has changed since Paul’s time. Our intrepid Gospel Outreach workers face opposition from other religions and harassment from government officials. But with firmness and determination, they keep on with their work because they know the value of having Jesus in their lives. With Paul, they can say: “Therefore we do not lose heart. Even though our outward man is perishing, yet the inward man in being renewed day by day … while we do not look at the things which are seen. For the things which are seen are temporary, but the things which are not seen are eternal” (2 Corinthians 4: 16, 18).

We who live in the comfort and security of America may scarcely fathom the difficulties faced by our GO workers in the 10/40 Window. But we can hold them up before our Father in prayer and be generous so they will have the means to carry forward their God-given tasks.

Jesus said, “Look up … your redemption draws near” (Luke 21:28). Thank you for your faithful support of Gospel Outreach. Soon we and the redeemed from the entire world can rejoice together in God’s kingdom.